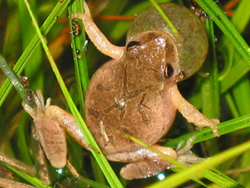 Reptiles and amphibians are experiencing exceptional declines with habitat loss and fragmentation among the leading threats to both groups. The Priority Amphibian and Reptile Conservation Area (PARCA) project is an initiative of PARC-National to develop a network of focus areas designed specifically for the conservation of reptiles and amphibians.  Areas are nominated using scientific criteria and expert review, drawing on the concepts of species rarity, richness, regional responsibility, and landscape integrity.  Modeled partly after the Important Bird Areas program developed by Partners in Flight, PARCAs are intended to be coordinated nationally but implemented locally at the state scale.

PARCAs are a nonregulatory designation whose purpose is to raise public awareness and spark voluntary protection by landowners and conservation partners.  PARCAs are not designed to compete with existing landscape biodiversity initiatives, but to complement them – providing an additional spatially explicit layer for conservation consideration.
Progress

2018-2020:  Next Steps for Partners for Amphibian and Reptile Conservation (PARC):

If you you have questions or comments about the Priority Amphibian and Reptile Conservation Areas Northeast Working Group, email Priya Nanjappa or Phillip deMaynadier.