This Award is presented by Northeast Partners in Amphibian and Reptile Conservation (NEPARC) to recognize an individual who has made significant contributions to conservation of amphibians and reptiles in the northeast region of PARC. The award recognizes someone who has worked with partners to make significant achievements for conservation of herpetofauna by preventing loss of species or their habitats or has educated others to further the PARC mission.

The recipient is presented with the award at the Annual Meeting of Northeast PARC, which is typically held each July or August. Recipients are awarded registration and lodging for this meeting, as well as a plaque commemorating the award. 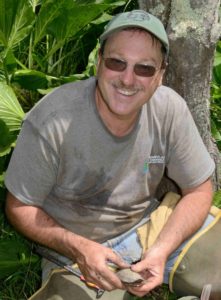 Scott Smith winner of the 2019 Northeast Partners in Amphibian and Reptile Conservation Award for Excellence in Herpetofaunal Conservation.

Scott Smith is a Wildlife Diversity Ecologist for the Wildlife and Heritage Service, Maryland Department of Natural Resources. He has been with MD DNR since 1989 and the MD representative and active participant in Northeast Partners in Amphibian and Reptile Conservation (NEPARC) since its foundation in 1999.

Scott recognized the need for herpetofaunal conservation early in his career with MD DNR. Scott’s previous experience focused on bird ecology and conservation, but he switched gears to become a strong advocate and leader within and outside Maryland to research and conserve rare herpetofauna. In 2009, Scott was officially recognized as Maryland’s herpetofauna expert. Scott has responded to 1000s of questions from the public, appeared on Public Television programs, presented hundreds of lectures and seminars, mentored over 100 naturalists and 30 students, and managed many research and conservation projects at the local, state, and multi-state level.

Scott initiated and fostered many strong partnerships within Maryland including governmental and non-governmental organizations, universities, and herp enthusiasts. His partnership with Maryland State Highway Administration (SHA) resulted in the protection of Bog Turtle habitat by re-routing roads that impacted their habitat. Scott recruited volunteers for Bog Turtle surveys, the Maryland Amphibian and Reptile Atlas, and Roadside Frog Calling Surveys. Scott established Maryland’s Diamondback Terrapin Working Group and co-led their Snapping Turtle Working Group. Scott’s work with Northern Map Turtle conservation partners resulted in the adoption of this species as a “town mascot”. Scott has nurtured partnerships with private landowners to protect and manage hundreds of acres of habitats.

Scott has been involved in many multi-state and regional partnerships. Scott led the Northeast Regional Conservation Needs Grants (RCN) to study Ranavirus distribution and prevalence in five states. Scott participated in Wood Turtle, Diamondback Terrapin, and Vernal Pool RCN projects. Scott also served as a member of the Reptile and Amphibian Subcommittee of the Association of Fish and Wildlife Agencies.

As one of NEPARC’s founding members, Scott served as NEPARC co-chair (2005-2006), was instrumental in the formation of the NEPARC Steering Committee, and was a Steering Committee member for 7 years. Scott co-hosted the 2000 and hosted the 2011 NEPARC meetings. He has been a key member of several NEPARC working groups including: Model State Herp Regulatory Guidelines, Disinfection Protocol, Ranavirus FAQ, Emerging Diseases, Snake Brochure, Risk Assessment, and Northeast Species of Regional Responsibility and Conservation Concern.

Scott’s hard work resulted in SHA becoming an advocate for Bog Turtle conservation. His tireless efforts with NGOs and universities resulted in numerous research projects, increasing our understanding of species ecology, distribution, and behavior, protecting habitat, and guiding management actions. Scott’s partnerships with zoos and nature centers improved awareness of conservation issues and appreciation for herpetofauna. Scott’s work with the Maryland Terrapin Working Group led to new regulations and enforcement to minimize bycatch. A unique partnership between a town, university, and DNR led to protection of a critical nesting beach for Map Turtles, balancing economic goals and conservation needs.

Scott was pivotal in raising awareness of Ranavirus in the northeast. He stressed the importance of disinfecting field gear to prevent the spread of disease. Scott helped to draft educational brochures for the public, guidelines for managing habitat on public and private lands, and improving habitat quality for herpetofauna. 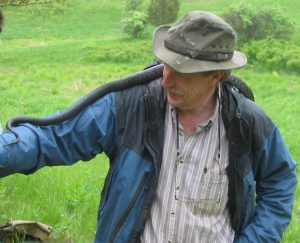 Jim Andrews winner of the 2017 Northeast Partners in Amphibian and Reptile Conservation Award for Excellence in Herpetofaunal Conservation.

Jim Andrews is an independent herpetologist working out of his home in Salisbury, VT.  Jim obtained his undergraduate degree from the University of Vermont and later attended Middlebury College for his masters degree.  Jim coordinates the Vermont Reptile and Amphibian Atlas (VtHerpAtlas.org), teaches herpetology at the University of Vermont, funnels grants through Vermont Family Forests (http://www.familyforests.org/), and works as a consulting herpetologist. He also chairs the Vermont Reptile and Amphibian Scientific Advisory Group to the Vermont Endangered Species Committee.

The Vermont Herp Atlas is a project begun in 1994 whose goal is to “to gather and disseminate data on the reptiles and amphibians of Vermont in a way that informs Vermont individuals and organizations so that they will become more informed and effective stewards of wildlife habitat”. Over the last 24 years this project has gathered, reviewed, and entered over 100,000 reptile and amphibian records from over 3000 people.  Every contributor is personally thanked and provided with basic information on the species reported.  New data on rare, threatened, and endangered species are shared with the Vermont Natural Heritage Inventory annually. Jim works regularly with Vermont Fish and Wildlife, and local TV and radio stations to inform the public about herpetological natural history and conservation.  He regularly speaks and leads field trips and workshops around the state of Vermont and in neighboring states.

Other Atlas projects include the production of a video on the reptiles and amphibians of New England titled “Rattlers, Peepers, and Snappers” with Vince Franke of Peregrine Productions.  This video has been used widely in classrooms from the elementary level on up through the graduate level.

He also works with the Otter Creek Audubon Society and the Salisbury Conservation Commission to organize annual amphibian migration nights to introduce Vermonters to the spectacle of spring amphibian migration.  This group also created a preserve for the overwintering habitat of reptiles and amphibians in Salisbury, VT.

In 2001, Jim introduced a herpetology course to the UVM Rubenstein School of Natural Resources and the Environment.  The course has been very popular with undergraduates, graduate students, and professionals working in the natural resource fields.  Many of those students have gone on to advanced degrees and careers in herpetology and related conservation fields.

Jim ran grants through Middlebury College from 1990 through 2008 and then began a grant relationship with Vermont Family Forests in Bristol.  His grant work has included long-term monitoring of amphibians at Mt. Mansfield through the Forest Ecosystem Monitoring Cooperative (http://www.uvm.edu/femc), long-term monitoring of amphibians and snakes in Lincoln, VT through the Colby Hill Ecological Project, and a continual run of State Wildlife Grants from Vermont Fish and Wildlife supporting radio-tracking, den location, and conservation of North American Racers and Eastern Ratsnakes, as well as support for the Vermont Herp Atlas.

Along with Sue Morse of Keeping Track (http://keepingtrack.org) and Chris Slesar of the Vermont Agency of Transportation, Jim designed and teaches a course called Habitats and Highways to introduce Vermont Transportation Agency personnel and their contractors to mammal and herp ecology and conservation.  The goal of the course is to minimize the impacts of transportation networks on wildlife.  Attendees are paid by the agency to take the course.  This course has been taught every-other-year in Vermont and occasionally in Maine and New Hampshire.  It has been instrumental in creating an effective and strong cooperative working relationship between VTrans, Vermont Fish and Wildlife, and others in the conservation community in Vermont.  In 2014 this course won the Distinguished Achievement Award at the Northeast Transportation and Wildlife Conference.

Jim’s consulting work deals almost entirely with minimizing the impacts of transportation projects on herps and other vertebrates.  Projects have included creation of artificial basking habitat for Spiny Softshells, creation of foraging habitat for North American Racers, and designing two highly successful underpasses for amphibians and other wildlife in Monkton, Vermont.  The underpass project won a 2017 Environmental Excellence Award from the Federal Highway Administration.

Through his position as Chair of the Vermont Reptile and Amphibian Scientific Advisory Group Jim has proposed and overseen the listing of Eastern Ratsnake and Fowler’s Toad and has assisted with state wildlife action plans, recovery plans, and many other herpetological conservation activities.

Jim has been an active member of NEPARC for over a decade. He serves on the Hellbender and Mudpuppy Working Group, and was one of the keynote speakers and field trip leaders for the 2016 NEPARC conference in Vermont. 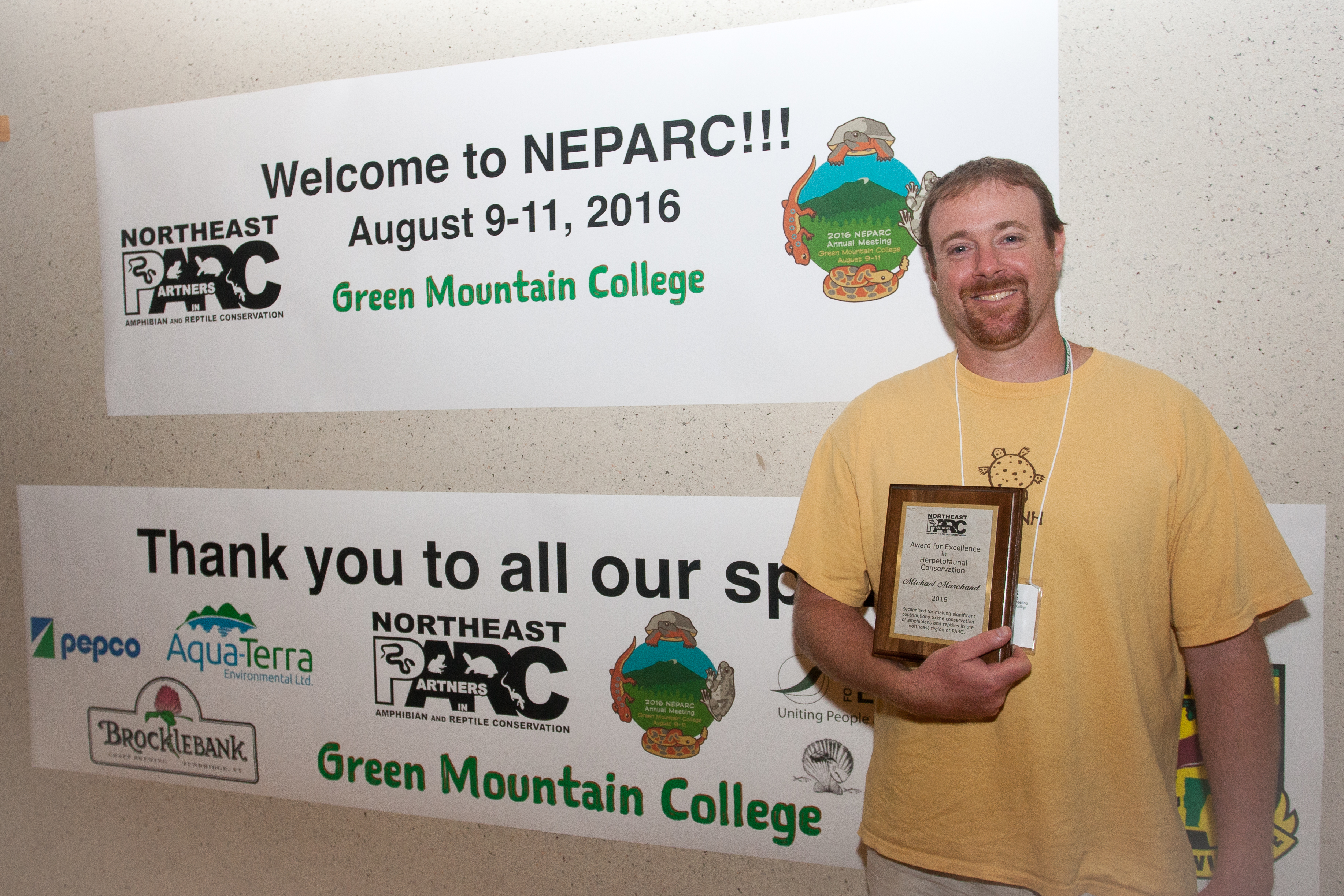 Mike Marchand winner of the 2016 Northeast Partners in Amphibian and Reptile Conservation Award for Excellence in Herpetofaunal Conservation.

Michael Marchand is a wildlife biologist for the Nongame & Endangered Wildlife Program at the New Hampshire Fish & Game Department (NHFG) and has been the NH representative and active participant for the Northeast Partners in Amphibian and Reptile Conservation (NEPARC) since 2004. During annual meetings, he has given presentations, led multiple NEPARC working groups, and assisted with overall organization.  Michael co-chaired the development of the Northeast Species of Regional Responsibility and Conservation Concern product which was adopted by the Northeast Wildlife Diversity Technical group and the methodology was applied to other taxonomic groups.  He also initiated a Snake Fungal Disease working group at the 2012 NEPARC meeting which helped lead to numerous partnerships nationwide, regional and national grants, and name recognition for the disease.  Michael has shown strong leadership by co-chairing NEPARC for two years, participating in the NEPARC steering committee for 8 years, and hosting a meeting in NH. He also spearheaded early efforts to develop a guidance document for NEPARC operations and vision.

While at the NH Fish & Game Department, Michael helped write, compile, and coordinate portions of the 2005 and 2015 New Hampshire Wildlife Action Plans and is implementing high priority actions including species recovery for timber rattlesnake, Blanding’s turtle, wood turtle, black racer, freshwater mussels, and other highly imperiled species. Particularly noteworthy, he has partnered with land trusts and funders to protect thousands of acres for imperiled Blanding’s turtle and timber rattlesnake. Michael is chair of the Northeast Blanding’s turtle working group, and coordinates multi-state (NH, ME, MA, NY, PA) grants to develop conservation plans and implement priority actions for Blanding’s turtles and has been actively involved in the development and implementation of regional grants for wood turtles and timber rattlesnakes.

In addition to targeted species recovery efforts, Michael coordinates the NH Reptile and Amphibian Reporting Program, coordinated the development and continued evaluation of an innovative online wildlife reporting website, and is the editor of ‘Identifying and Documenting Vernal Pools in New Hampshire.’ In an effort to enhance the public’s attitude towards reptiles and amphibians, Michael has published a tremendous amount of information on reptiles and amphibians through the NHFG website and has provided numerous interviews to newspapers, radio and television programs and written popular articles.

Supplemental to proactive conservation planning efforts, Michael has helped enhance state regulations for the protection of reptiles and amphibians. He successfully established rules in NH to protect reptiles and amphibians from over-collection, recommended changes to the state threatened and endangered wildlife list, and worked with NHFG law enforcement to monitor compliance of state regulations. Michael regularly coordinates with other resource agencies, consultants, and developers while reviewing proposed development projects and negotiating solutions to minimize adverse impacts to protected wildlife and represents the NHFG on a wetlands mitigation fund selection committee that has distributed millions of dollars to land acquisition and restoration.

Prior to joining NH Fish & Game, Michael studied the effects of fragmentation and development on turtles as part of his graduate work at the University of New Hampshire. When not working, he enjoys spending time with his family, hiking and skiing in the mountains, relaxing at the lake or ocean, and exploring as much of the world as possible.